Finally my second case Ghost Light has seen the light of day. A haunted theatre? An accident in an eerie graveyard? My friend Meera doesn’t think these things have anything to do with ghosts. She could be right. Maybe she’s wrong. You won’t know the truth unless you read the book!

Here are the first few pages of our investigation …

I am sitting in the brand-new Ambassador Theatre, observing.

That’s what detectives do.

My bum is the first bum to ever touch this prickly, cloth-covered seat. How awesome is that?

Around me heaps of nervous kids are waiting with their parents/teachers/friends. They’re here to try-out for a part in Macbeth, the play by William Shakespeare. The one about murder. And witches.

My best friend Cossie hurries up the aisle. ‘Cinnamon, Cinnamon!’ Behind her glasses, her eyes are wide with excitement. ‘Cinnamon, do you believe in ghosts?’

‘Do I believe in goats?’

‘No, GHOSTS!’ Cossie bounces into the seat next to me. ‘I think I just saw one!’

‘It was white and shimmery. It gave me a wave and disappeared.’

‘No idea. Back to the astral plane?’ Cossie grins. ‘Course I might be mistaken. I’d taken my glasses off to give them a polish. You know I’m short- sighted. Maybe it was a cleaner or someone.’

‘Yeah. Maybe.’ Or maybe not! This sounded like something I should investigate.

I check the time on my phone. ‘Cossie, we’ve ten minutes before your audition starts. Let’s go find this ghost!’

She gives a thumbs-up. ‘Wicked!’

That’s why Cossie’s such a good friend. She’s always up for adventures.

We hurry down the centre aisle. Cossie leads, I limp along behind. During my last case I’d sustained a life-threatening injury [1] (okay, a broken toe) which was healing. Slowly.

The auditorium is built like an amphitheatre, with tiered seats leading down to the stage. The whole place smells of fresh paint.

When we reach the stage with its massive scarlet and gold curtain, Cossie whispers, ‘Quick, in here!’

We slip through a narrow gap at the side of the curtain into the backstage area. An almost invisible door is tucked against a far wall.

My friend says, in a Dracula-type voice, ‘I voz searching for a place to practise my lines ven I discovered zat door and ze secret stairs beyond. Come, Cinnamon, ve must go down ze stairs into ze darkness!’

She opens the door. Beyond is a space like a lift shaft. But there’s no lift. Instead, a metal staircase spirals above our heads and beneath our feet, lit by dim electric lights. We’re near the bottom of the stairs, only a few steps away from a shadowy, cavern-like basement.

I’m starting to feel less enthusiastic. Not that I’m scared of the dark exactly. I just prefer places that are brightly lit.

Cossie skips down the stairs, which clink and shake, not at all worried by the spookiness.

The basement is as quiet and dark as the auditorium had been full of light and noise. The place smells of dust and plumbing.

A bank of sensor lights flash on. Weirdly they make the murky places seem even darker.

Now that my eyes are used to the gloom I can see boxes and piles of material jumbled about. Strange huge shapes lie shrouded under tarpaulins. There will definitely be rats (and other yucky things) hiding here, ready to pounce.

‘We are actually under the stage. A perfect spot to rehearse, I thought,’ says Cossie.

She points towards a corridor leading off the basement. It’s signposted Toilets and Wardrobe. ‘That’s where I saw the ghost.’

The long corridor yawns at us, completely empty.

‘Oh, it’s gone. What a pity.’ She sounds disappointed.

‘The old Ambassador was built over a hundred and fifty years ago by the great actress Adelaide Glendenning.’ Cossie pats one of the basement’s rough stone walls. ‘This is the only part of the original theatre left. Prob’ly where the ghost lives. It must have slipped out through these cold, grey slabs…’

I touch the wall with my fingertips. It is cold. The whole basement is cooler than upstairs. Aren’t haunted places supposed to be chilly?

The sensor lights flicker. A few go out.

The back of my neck prickles like I’ve got raging nettle rash.

I babble, ‘Yes, yes, fascinating. We should get back now. Come on Cossie. Come on out of here!’

Note to Self: Great detectives have Nerves of Steel and are not – repeat NOT – freaked by the dark. Must overcome this weakness a.s.a.p. 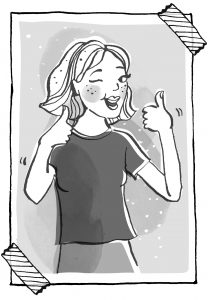